One shoe size fit's all in Congress?

This July, President Obama signed the UN Convention on the Rights of Persons with Disabilities (UNCRDP). The news came to me during a particularly tough time in Basrah, Iraq. We were receiving frequent incoming fire and my colleagues and I had spent far too much time hunkered down in a bunker, sweating in body armor in 130-degree heat.

I have been Mercy Corps’ coordinator for disability rights in Iraq for more than two years, and the ''signing'' made me wonder: How will this help me or the many Iraqis with disabilities I’m trying to serve? I have seen similar declarations and clauses hundreds of times. USAID has a clause about the inclusion of people with disabilities, the World Bank does and the UN talks ad nauseum about it. But what is the actual impact?

So far, not much. According to the UN, the convention marks a “paradigm shift” — but just because you put in down on paper doesn’t mean that attitudes have change. A paradigm shift takes action. The Convention is intended to secure rights for all people with disabilities, but no signatory country is complying with it, so what is the enforcement mechanism? There is none, which makes it a grand but empty gesture.

If we really want to address the disability issue, we need to do three things. First, we must acknowledge the scale of the problem and the fact that we are not effectively addressing it. People with disabilities (PWDs) make up 10 percent of the world’s population, 650 million people, and every day that number increases. The World Bank estimates that 20 percent of the world’s poor have a disability.

Yet when the Millennium Development Goals — the international community’s agreed-upon targets for combating scourges like poverty and hunger — came out in 2000, there was no mention of disability. Sluggish or nonexistent funding flows have followed suit. This has to change; ignoring a problem doesn’t make it go away.

Second, aid workers must transform how we address the needs of PWDs. The international community too often “helps” people with disabilities through what are called “supply projects,” massive giveaways of items like crutches and wheelchairs. The problem is that a wheelchair, particularly the commonly supplied 28-pound hospital chairs designed for patient transfer, does nothing but provide a place to sit.

In order for mobility equipment to be effective, it has to be supplied on a demand basis, with the needs of a specific user in mind. The current supply model would be analogous to my collecting 435 pairs of shoes from Iraq and sending them to the House of Representatives with no information about size or width. The Representatives would then need to sort through the shoes to see what fits whom, and then try to make do with whatever was sent. We would never do that. So why do it for people with disabilities?

Finally, we need to effect an attitude adjustment by teaching people with disabilities to be activists and role models. Years ago, as an intern for Congressman Richard Stallings of Idaho, I lobbied for the Americans with Disabilities Act (ADA). In 1990, when the ADA was signed, the unemployment rate for PWDs was around 70 percent. Today, it is still 70 percent, and some studies even claim an increase in unemployment since the ADA.

What can we learn from this? Real change for people with disabilities is not about getting a ramp or a wheelchair; America is physically accessible. The main barrier for PWDs is the attitudes that the able-bodied population has about them. PWDs are often viewed through the lens of our limitations rather than our capabilities; this situation is even more marked in developing countries.

People with disabilities must be empowered to demand their rights and smash these preconceptions. Advocacy work to create this change is currently being implemented in Russia by Perspecktiva and was being implemented in Iraq by Mercy Corps in 2007-08 until funding unfortunately ran out.

The columnist Charles Krauthammer said, “Celebrating the paralytic's ‘courage’ is the psychological equivalent of calling an accomplished black person ‘a credit to his race’ — it is a patronizing act of distancing wrapped in the appearance of adulation.”

The UNCRDP is a patronizing act of distancing wrapped in the appearance of “rights.” For me and the millions of other people with disabilities around the world it changes nothing. It’s just a piece of paper that world leaders feel good about signing.

Thank you, world leaders, for defining my rights, but I won’t be impressed until you provide the funds to help me realize them. As a start, you can support smart, strategic programs that help PWDs take charge of their lives, not just squeeze into an ill-fitting wheelchair. Contact me if you need ideas — I’ll give you a program for PWDs that is inexpensive, effective and empowering.
Posted by Unknown at 1:16 PM No comments:

NEW ORLEANS, Louisiana – The Red Thread Promise, a 501(c)(3) charity dedicated to providing medical care to orphans around the world, announces the extraordinary donation of 50 all-terrain wheelchairs, plus shipping costs, by the employees of the Canadian office of Halliburton (NYSE: HAL). As part of The Red Thread Promise’s Wheelchair Initiative, these desperately needed chairs will be distributed to people in Haiti. TRTP is supporting this donation with its own contribution of the maintenance and repair kits that will keep these wheelchairs in operating condition for years. 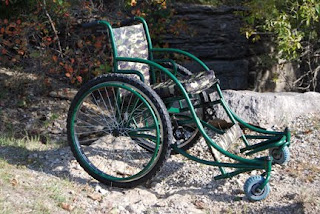 We have all read a great deal about the crushing circumstances facing the survivors of Haiti’s January earthquake. Among the most needy are thousands of new immobile amputees: men, women, and children. Haiti’s economic and social structure has always provided special challenges to a physically handicapped person. In the post-earthquake period, amplified lack of resources coupled with extremely poor road conditions make traversing the mountainous country even more challenging.

A new All Terrain Wheelchair (ATW) can do wonders to help this underserved population. Developed by Mobility International, of Fort Smith, Arkansas, this wheelchair bears little resemblance to a typical wheelchair. Instead, it is geared to rougher urban or rural terrain. Its back wheels are mountain bike tires and it sits lower, with a special seat cushion that absorbs bounce. Special automatic flex suspension controls side-to-side movement, and the front end extends forward to provide front-to-rear stability.

This rugged vehicle is therefore suitable for a wide range of indoor and outdoor use, from hospitals to city streets to off-road terrain. Its heavy-duty construction is ideal for passage over the steep ascents and descents characteristic of the roads and pathways in rural areas of Haiti where it is most critically needed. Kathy Korge Albergate, President of TRTP, says, “This generous donation will make an immediate, direct, and profound difference to the recipients, enabling children to return to school and adults to find or return to work.”

Each year Halliburton hosts the Halliburton Academy, an event that brings together over one thousand employees from all over the world in Business Development, Technology, Operations and Functional groups to learn more about company's strategies and technologies. During the event, employees play the Chairman’s Cup Golf tournament, with part of the entry fee earmarked for a charity that is chosen by the winning team. The Red Thread Promise wishes to thank the members of the winning team, John Gorman, Sheldon Harbinson, Fred Farmer and Trent Ulmer, from Canada, for choosing the Wheelchair Initiative.

The donated chairs are scheduled to land in Port au Prince in June, and then will go to Mountain Top Ministries (MTM) in nearby Gramothe for distribution. MTM is a well-established institution that provides a school and clinic to impoverished mountain residents of Haiti. One of the organization’s chief priorities has been to help fellow Haitians take ownership of their nation and work to defeat generational poverty, village by village. Willem Charles, founder of MTM, says, “We are delighted with this promising response to our great need for all terrain wheelchairs. Not only will this donation provide independence to handicapped members of our community, but we have a well-equipped workshop ready to provide training in assembly and maintenance of the wheelchairs.”

Founded in 1919, Halliburton is one of the world's largest providers of products and services to the energy industry. With more than 50,000 employees in approximately 70 countries, the company serves the upstream oil and gas industry throughout the life cycle of the reservoir - from locating hydrocarbons and managing geological data, to drilling and formation evaluation, well construction and completion, and optimizing production through the life of the field. Visit the company's Web site at www.halliburton.com.

About The Red Thread Promise (TRTP)

The Red Thread Promise (TRTP), a 501(c)(3) nonprofit organization providing medical care to the world’s orphans, has a long-standing relationship with Mountain Top Ministries. Members of TRTP visit Haiti regularly, hand-carrying supplies and teaching English in the school. President Albergate says, “The Haitian mountains are a constant obstacle to impoverished disabled children, adults and seniors attempting to maneuver through the rough terrain. These all terrain wheelchairs can provide a life-changing experience for those who are immobile. We are grateful to have the opportunity to directly impact the lives of so many people in need.” Learn more or donate at http://www.redthreadpromise.org/.
Posted by Unknown at 9:21 AM 1 comment: