In Port Au Prince.
Awestruck.
It's easy to focus on the bad and quote folk's thoughts when they step off the plane, "This is worse than I ever imagined."
History, many times, begins when one discovers it
There is something GOOD going on in Haiti ... a country reinvigorated.
Getting off the plane, one can see the damage. Much of the old terminal shows the cracks from the earthquake. A new walkway has been built. The rebuilding of the structure is awaiting the final revised building codes.
Caribbean music was being played by a group Digicel sponsored as we disembarked the plane and climbed onto the bus to take us to immigration.
Driving through the city, one sees much activity. People are busy working at cleaning up the rubble. this is a slow process ... many of the workers on have wheelbarrows to cart the stuff away. Most of the roads amazingly are much smoother than the ones we have in Tulsa. I was pleasantly surprised that a country that has 70% unemployment has the fortitude to focus on infrastructure.
Mom and pop shops are starting to come back into operation. Business is starting to be rebuilt in the city
Checked into the hotel. 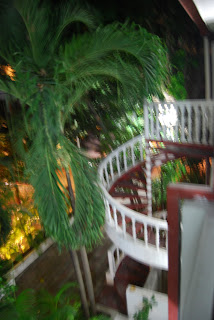 And then reality. Just across the street, thousands of folks in tents
A block away is the presidential palace which is still collapsed.
The hotel is an old Holiday Inn. It was built to American standards and is an oasis in the city for humanitarian workers, journalists and professional visitors. A testament to forethought and building structures that will endure.
There are signs that folks are starting to chip away at the presidential palace and rebuild. The lawn is nicely groomed. Haiti a proud nation.
The world is a closer place. We have our differences ... but we can also work together with true understanding for a brighter tomorrow.
Faith in humankind has been refreshed ... there is resolve to move forward despite the setbacks.
Posted by Unknown at 10:36 PM